The NZSO programme of popular classics features Dvorak’s thrilling Symphony No 9, From the New World – one of the most popular symphonies ever written.

Hong Kong-born conductor Perry So will lead the orchestra. Only in his twenties, he is already set to become a classical music megastar.

He will be joined by 24 year-old violinist Tianwa Yang, whose performances in the US have excited both critics and audiences. A former child prodigy, Yang was described as “The Pride of China” when she was only 11 years old.

The concerts feature arias from Jack Body’s Alley opera, sung by Australian counter-tenor Jon Jackson, whose versatile voice has been said to be able to “wallow in the depths like Johnny Cash, growl like Eartha Kitt, purr like Peggy Lee and trill like Maria Callas”.

The NZSO is using the Chinese New Year as an opportunity to focus on China’s growing importance in the classical music world.

Postcards from Exotic Places takes the form of a journey that will transport the audience from East to West, from the old world to the new.

The concert opens with Chinese-American composer Bright Sheng’s Postcards, which draw a series of colourful pictures of a mystical, old-world Chinese landscape.

We move through a newer China with arias from Jack Body’s opera Alley – which is based on the life of the New Zealand born-poet of the Chinese Revolution, Rewi Alley. From here we continue to the warmth of Spain and the piquant rhythms and melodies of Lalo’s Symphonie Espagnole.

Our musical odyssey comes to a magnificent conclusion in America with Dvorak’s thrilling Symphony No. 9. The Czech composer was inspired by the local music he heard while working in America near the end of the 19th century.

Postcards from Exotic Places is presented in association with Four Winds Foundation Limited.

*There will be a free pre-concert talk within the venue by composer Jack Body one hour before each concert. 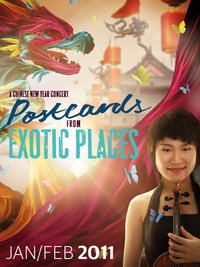